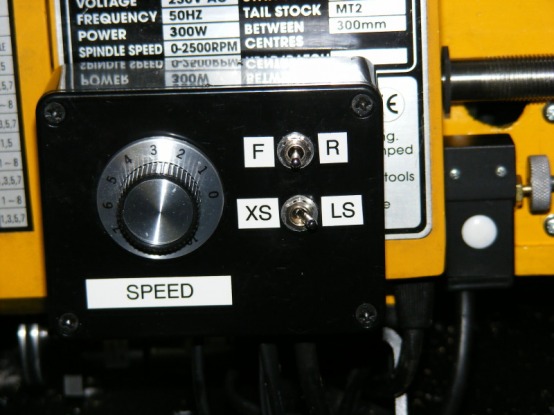 Having installed motors to the cross slide and leadscrew, and added the autostop, some means to control the motors were now required. The basic power supply for the motors was a plug in dc power supply rated at 12 V and 1A. I have a large collection of these plug in power supplies since almost every piece of consumer electronics now seems to use them. These items eventually break or become overtaken by new technology and are thrown away but I always save the plug in transformers " in case they  come in handy". The transformer I used came from this collection. 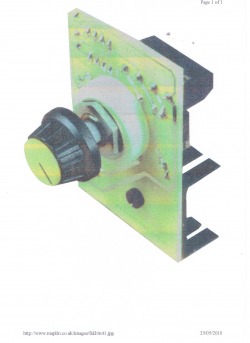 The basic speed control I used was a ready built unit, shown here, made by MFA. It is designed for controlling model motors. I purchased it from Maplin (www.maplin.co.uk), order code RN4 1U. It will work with input voltages of 6-15 V and it will handle 3A continuously. It is a basic pulse width modulated power supply. It would be perfectly possible to construct such a speed control using readily available parts however the ready built unit was only £15 and it hardly seemed worth the effort to build it. The unit has only four terminals: two for the input and two for the output. 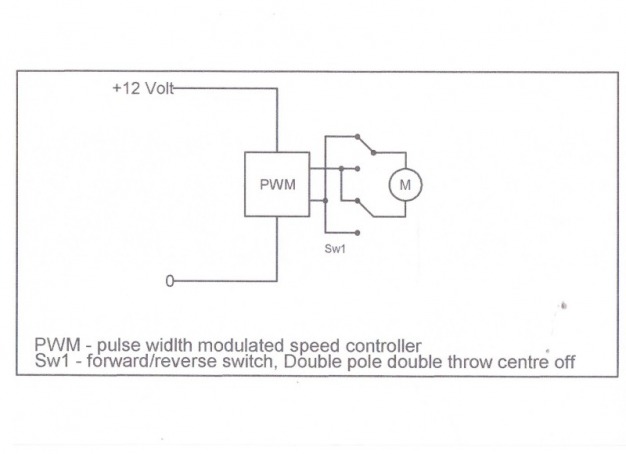 The circuit diagram above shows the basic circuit for controlling the motor speed and direction. power comes in from the left and through the speed controller. The output from this then goes to a reversing switch and then to the motor. The reversing switch, Sw1, simply alters the polarity of the current applied to the motor. Since I could not envision any occasion when I would need to run both the cross slide motor and the leadscrew motor together I decided to adapt this basic circuit to control either one. The leadscrew motor would also incorporate the autostop feature. 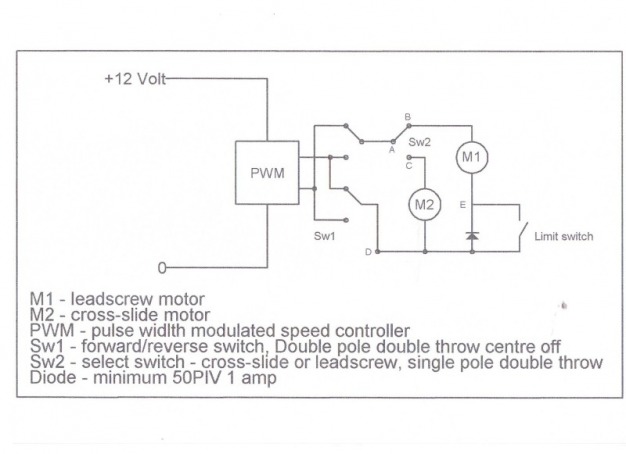 The circuit above shows the controller for two motors and incorporates the autostop feature. From the left the first part is the same as the basic circuit shown above. The switch Sw2 selects which motor the output from the speed controller module is directed to. If the leadscrew motor is selected then the motor is connected via a diode and the limit (autostop) switch. With the carriage away from the stop the limit switch is closed. When the carriage operates the autostop switch then the current to the motor is disconnected and the motor stops. The diode must be wired up to be reversed biased (i.e. no current will flow) in this situation. When, however, the direction switch is changed to reverse, the current will flow in the opposite direction and the diode will conduct and the motor will move the carriage away and the limit switch will close.

The whole unit was built into a small ABS box 100mm x 80 mm x 40 mm as shown in the header photo. The top switch selects the direction. Forward (F) will move the carriage towards the headstock or the drive the cross slide in. Reverse (R) has the opposite effect. The switch below selects either the cross slide (XS) or the leadscrew (LS). The knob controls the speed. The box is attached to the front of the cover for the lathe electronics by double sided tape. All the leads come out of the bottom of the box, through grommets, so ingress of swarf or oil is unlikely. The box is offset to the left hand side of the lathe electronic cover so as not to interfere with the carriage handwheel.

Full speed will drive the cross slide at 30 mm/min. For the leadscrew with 20/80,20/80 gearing the maximum speed is circa 28 mm/min although this can be increased, if necessary, by changing the gear ratios. In both cases the speed can be varied downwards by a factor of circa 10 by using the control knob.