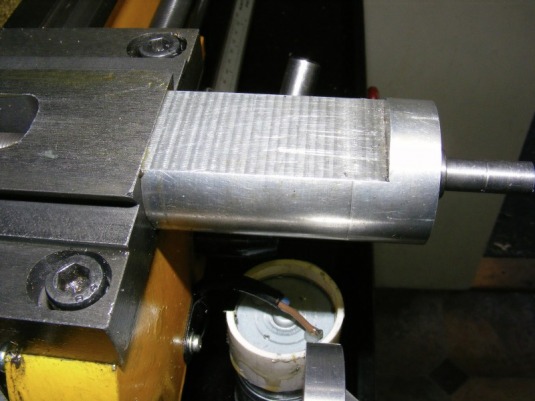 The cross slide travel on the as supplied lathe is a little limited. It can swing a 7" workpiece but the cross slide cannot be moved back far enough to cut at the edge of such a workpiece. There are two factors limiting the forward movement. Firstly, the extension that houses the thrust bearing at the front of the carriage is quite short and secondly  the leadscrew nut movement is limited by the length of the slot in the carriage. This project was initiated to solve both these problems. At the same time the standard thrust bearing was replaced by a ball bearing for smoother operation and a longer leadscrew was installed permitting greater movement in the rearwards direction. This modification was very much inspired by a similar modification crried out by John Moran (www.gadgetbuilder.com).

The photo above shows the new extension on the front of the carriage. This is 60 mm long and turned from 1.1/2" aluminium. The top face is milled away to allow movement of the cross slide over it. 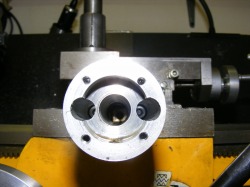 This shows the front of the carriage extension. Note the bored recess for the 608ZZ ball bearing and the M4 socket head bolt at the bottom of the two deep holes. The M4 screws bolt the extension to the carriage. Ignore the four small holes in the front of the piece. These are for a later modification. The bearing is retained in the recess by a small M4 grub screw at the bottom. 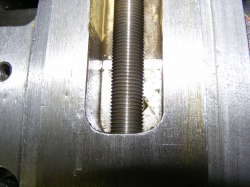 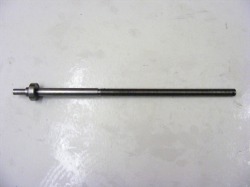 This photo shows the new longer leadscrew, with the ball bearing. This is 275 mm long. It is machined from 10 mm free cutting steel. The thread is left handed and has a 1 mm pitch. One end is turned down to 8 mm for the bearing. When making the leadscrew an extra length was threaded and this was used to make a tap so that I could then make my own leadscrew nuts. The length for the tap was fluted and case hardened.
The assembly is identical to that shown for the topslide modification for extended range, with the same modified friction arrangement for the graduated collar.

If I were doing this modification again then I would not mill out the carriage slot. Instead I would simply move the leadscrew nut  25 mm further back on the cross slide. This would achieve the same result as extending the slot.