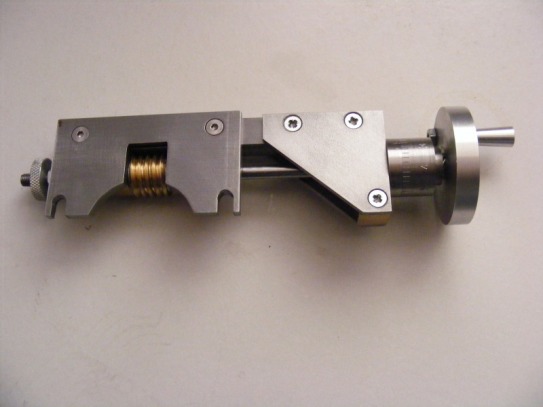 Very soon after starting to use the lathe I realised that a means of indexing the the head stock around in a precise way was a very necessary unit. This can be used for marking out bolt circles on objects held in the lathe chuck, for graduating dials, etc.
I made a very simple indexing unit that fitted on the rear end of the spindle that would hold a change gear and with a simple detent unit some simple indexing was possible. However, something more versatile was required especially for graduating. The obvious solution was a worm wheel that engaged with the bull gear attached to the spindle shaft. This has 45 teeth so one turn of a worm would rotate the spindle through 8 degrees. The problem with this was where to get a suitable worm gear. I had read that worms must be precisely matched with the worm gear and that the helix angle must match the gear angle. This was rather daunting. Then I realised that these comments really related to power transmission gears. In a headstock indexing unit the worm is only used to rotate the gear through a precise angle and there is almost no load on it. In the lifetime of the unit it is only ever going to make a few hundred revolutions so wear was not an issue. My conclusion from this was that any worm that would mesh with the gear would probably serve.

The back bone of the whole unit is a length of 1/2" square steel. The shaft is a length of 6 mm round mild steel. The bearing blocks are made from 1/2" square brass drilled for the shaft and attached to the 1/2" bar by 4 mm socket head screws. The worm gear was a length of 3/4" round brass bar that was fixed to the shaft with epoxy resin. The steel shaft was lightly knurled prior to fixing the brass to be bar to give a friction fit and to promote good adhesion. The shaft was mounted in the lathe for screw cutting. The brass was faced both ends and lightly skimmed to true up the surface. The worm was cut using a 40/20,60/57 gear combination, and a normal 60 degree threading tool. After assembling the components onto the bar the end brackets were added to reinforce the final bearing block. The handle with graduated friction collar was held on the end of the shaft with a grub screw. The graduated collar has eight major divisions of 1 degree each and each major division is subdivided into five 0.2 degree divisions. 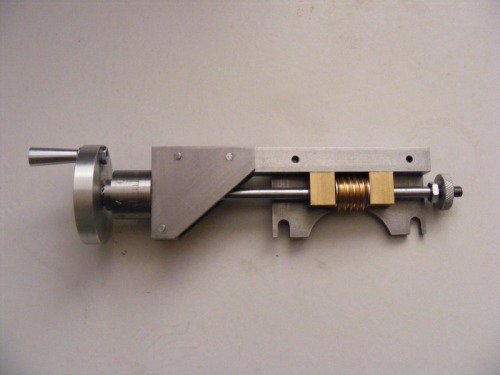 The photo above shows the brass bearing blocks. There is a longer brass block under the reinforcement bracket. The shaped bracket with the two open slotted holes provides the attachment to the head stock.

Fitting the unit to the lathe. 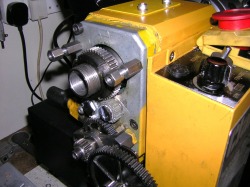 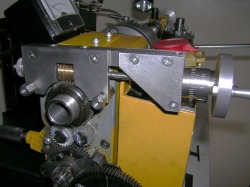 This photo shows the indexing unit mounted on the lathe. Note that backlash between the worm and the gear is eliminated by pushing the worm firmly in contact with the gear before tightening the nuts.

Modification to the gear cover 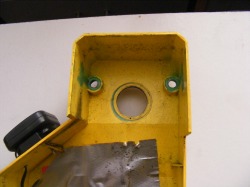 I leave the studs in place when not using the indexing unit but this then fouls the gear cover. To overcome this the extended holes in the cover were removed. A simple tool, similar to a  counter bore was made from mild steel to do this, see photo below. 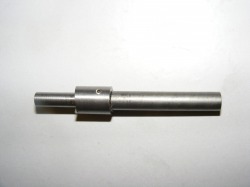 The tool was made from a piece of 6 mm rod and a small cutter made that slips over the rod. The cutter is attached with a small grub screw. Although made from mild steel this cut the plastic away very easily 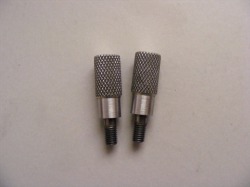 The long 4 mm screws that normally hold the gear cover in place were replaced by two much shorter knurled screws. The short screws are much easier to locate and turn than the previous screws.
At a later stage I made a permanently mounted 60 hole indexer using the headstock indexing unit and the tool post drill.