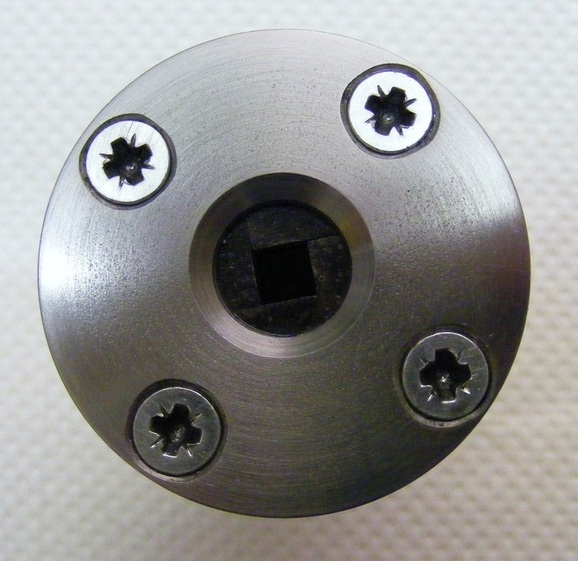 When I made my pillar tool I fitted it with a conventional drill chuck. In practice this did not work very well with taps larger than M5 because the tap would slip in the chuck during tapping operations. I looked around for a simple four jaw chuck that would grip the tap by the square end in order to eliminate this problem but could not find anything. I remembered reading of a novel design of tap wrench published in Model Engineer in July 1964 by W.E. Briley. This was republished in Workshop Practice Series No 26. The tap wrench grips the tap on the square section at the end of the tap. I decided to try and convert this idea into a tap chuck that could be fitted to my pillar tool.

The principle of the device is illustrated in the diagram below: 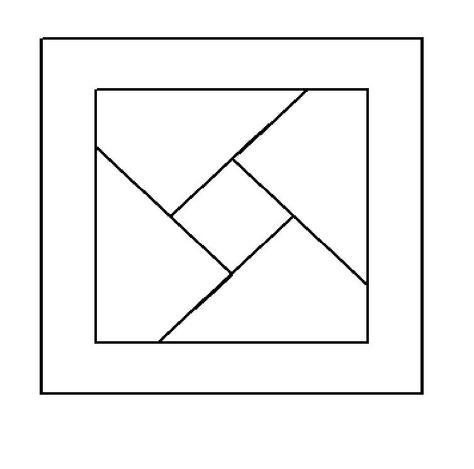 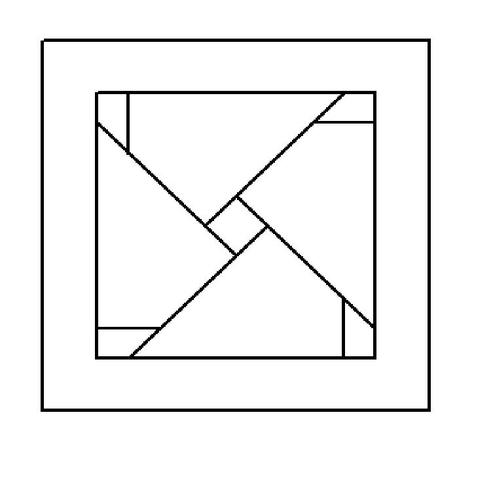 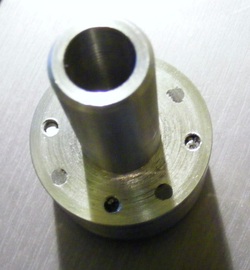 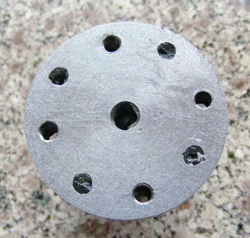 The flange viewed from the other side. Note the 6 mm hole in the centre of the flange. This is used later to centre the chuck jaws on the axis of rotation.

The outer ring of holes is for attachment of the aperture to the base of the chuck. These are not drilled until the chuck is finally assembled, see later. 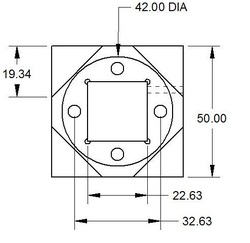 The next step was to mark out the components for the frame and the triangles, as shown, on a piece of 50 mm square x 10 mm thick steel plate. The edges of the plate were milled square prior to marking out.

Four 1.5 mm holes were drilled at the corners of the frame aperture and the four larger 3.3mm holes drilled.

The central frame aperture was then milled out using a 6 mm slot drill and then the corners filed out using a triangular file. A 2.5 mm hole (shown dashed) is drilled centred 3 mm from the aperture edge and at half the plate thickness. This hole is to allow access to the adjuster screw.

Each triangle was then mounted on parallels and one corner truncated so that the length of the long side was reduced to 17 mm. 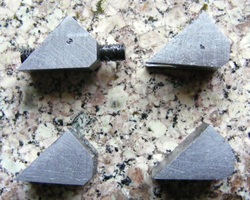 This shows the four truncated triangular pieces. The one that was tapped has been fitted with an M4 grubscrew that is slightly less than the frame aperture in width. 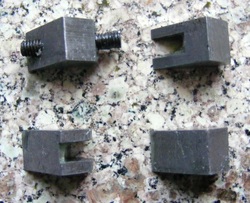 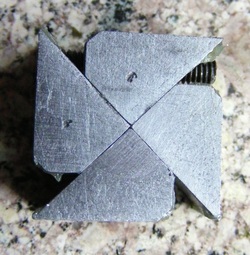 The four triangles fitted together with the adjuster screw. 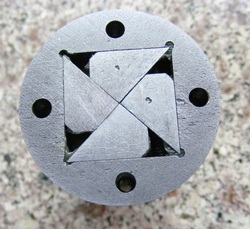 The four triangles fitted into the frame.
When assembling the chuck a piece of 6 mm rod was inserted into the base flange. The aperture plate and triangles were then adjusted so that the centre hole was larger than 6 mm. This was then passed over the 6 mm rod and the chuck closed by turning the adjuster screw until it is firmly clamped onto the 6 mm rod. The 3.3 mm holes are then spotted through to the base flange. The base flange is then drilled through 3.3mm  at the marked positions and the holes tapped M4. Using this procedure ensures that the chuck jaws are symmetric around the axis of rotation.

The base flange appears to have eight holes. This is because the tap broke off whilst tapping the last hole (it is always the last hole!!). The broken tap was broken off below the level of the flange and the four holes filled with epoxy putty. Four new holes were drilled and tapped after rotating the flange through 45 degrees. 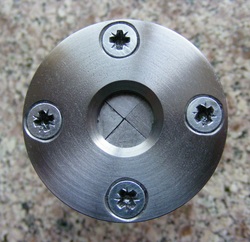 The final operation was to make a keep plate to retain the blocks. This was made from 3 mm steel plate with an 11mm centre hole and four 4mm countersunck holes for the retaining screws.

After final assembly the whole unit was chucked in the lathe and turned to a good finish on the outside.
The main advantage of this chuck is that it grips the square end of a tap very firmly and slippage is virtually impossible. The one minor problem that has been found is that the square end of some taps are not quite square and this can allow them to rock slightly in one direction.