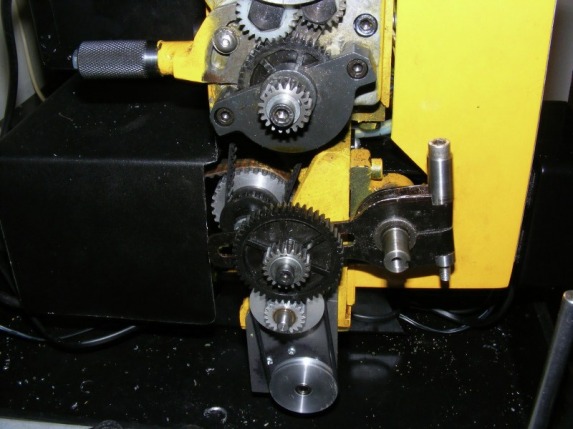 One way round this is to fit a separate auxiliary drive motor to the leadscrew. With a motor speed controller attached to the motor then the speed can be varied over a wide range just at the turn of a knob. Several other workers have done this (e.g. Varmint Al). In all the examples I have seen a very slow speed motor is directly coupled to the leadscrew. This coupling can be made at the headstock end of the leadscrew, but then the gear cover must be either rejected altogether or modified extensively. The alternative is to couple the motor to the tailstock end of the leadscrew but then the motor would be hanging off the end of the lathe. In either case some arrangement is necessary to disconnect the drive motor in order to use the leadscrew handwheel or engage the autodrive.

The arrangement that I have adopted is rather different. I have mounted the motor underneath the lathe at the headstock end and use the motor to drive a small pulley connected to another pulley which drives a 20 tooth gear, as shown in the photo above. By turning the change gear banjo to the horizontal position rather than the more normal vertical position it can then pick up on the 20 tooth gear and transmit the drive to the leadscrew, as shown (Note: the final gear to the leadscrew has been removed so that the banjo can be seen). The banjo can be readily swung up from this position to connect the leadscrew to the spindle driven gear or at a position between these two the banjo is not connected to either the auxilliary gear or the spindle gear. The benefits of this system are:

1. Almost no change is required to the gear cover and it can be easily taken on and off.
2. The motor is completely hidden away and protected from swarf, oil and inadvertent knocks.
3. The gearing to the leadscrew via the banjo can be changed permitting a very wide range of leadscrew speeds from the auxilliary motor.
4.The banjo position can be readily changed to drive the leadscrew from the auxiliary motor, the spindle or, in the neutral position, from the leadscrew handwheel

The motor is mounted on a piece of 1/4" plate that attaches to the lathe bed using the tapped hole for the old standard lathe banjo. This drives a pulley with a 60 degree groove turned from 1.1/2" diameter aluminium. This connects to a similar pulley using an o ring for the belt drive. The pulley and 20 tooth gear are both pressed onto a hollow shaft that rotates on a 6 mm steel pin. The pulley/gear hollow shaft is retained on the pin by a circlip. The gear could be a standard 20 tooth change gear but I cut the 20 tooth gear from aluminium. 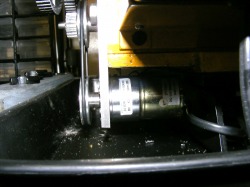 This photo shows the profile of the motor/pulley/gear system. Note that the motor actually tucks away under the lathe bed. Here it is very well protected and swarf is unlikely to find its way to the motor terminals. The lead from the motor can be seen. 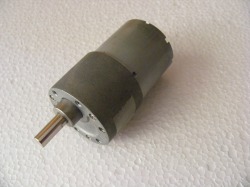 This photo shows the motor. It is a 12 volt, 300 rpm geared motor. The diameter is 36 mm and the body length, excluding the shaft and the terminals is 55 mm. If you enter "dc motors" on ebay then there are many similar motors with different speeds available with these same dimensions. They all come from various suppliers in China or Hong Kong and the cost including shipping is around £10 and a delivery time of circa 20 days.
The electric circuits for controlling the motor are given in the subsection entitled Control circuits.