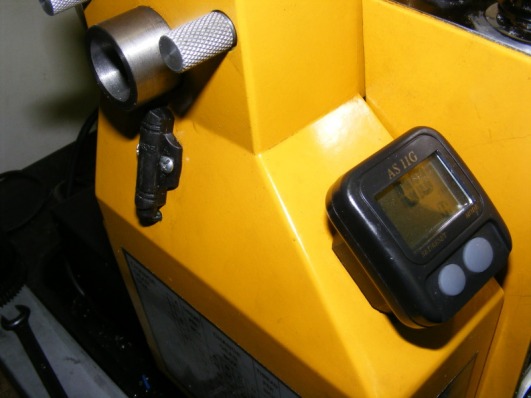 A tachometer on the lathe is a useful accessory and many of the latest versions of the minilathe are now supplied with one. However, it is very easy to add a tachometer based on a cheaply available cycle computer. The version I bought was a model AS 11G. This has a built in revcounter function and it is available in the UK from Wilkinsons for about £7.  The cycle computer is self powered, by a small button cell and it has a myriad of functions which are irrelevent to lathe operations so only the revcounter function is used. The default display gives the time but as soon as the lathe spindle turns it instantly switches to the rev counter mode. The photo above shows the tachometer installed on the lathe. Everything is fitted to the change wheel gear cover so there are no trailing wires. The cycle computer is fitted on the sloping front of the change wheel cover using the bracket supplied and the sensor can be seen just below the spindle. 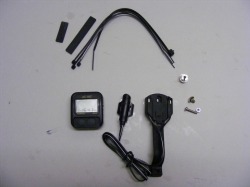 This photo shows the parts supplied with the cycle computer. At the bottom are the cycle computer, the sensor and the mounting bracket. Above is various mounting hardware. The sensor is actuated by a small magnet that is designed to be attached to the bicycle wheel.The magnet is the small silver round object on the right of the photo. The bracket has a long tang on it that needs to be cut off. The lead between the bracket and the sensor is too long so this need to be shortened. This is cut somewhere in the middle. 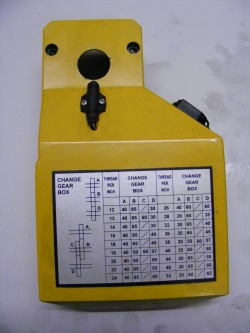 The sensor and bracket are mounted onto the change gear cover with small self tapping screws and the wires are fed through small holes drilled in the cover. 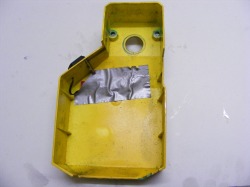 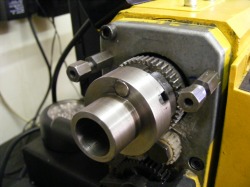 The sensor is actuated by a small magnet. I drilled a small hole in my spindle extension for a neodymium magnet as shown in this photo. I intended to fix this in place with epoxy resin. However, before applying the epoxy I tested the fit of the magnet in the hole and after it had gone in there was absolutely no way it was going to come out. It has been there for at least 6 years just held in by its own magnetism!
The cycle computer just fits into the bracket and this connects it to the sensor. The cycle computer responds to the speed control knob from very low speeds up to the maximum speed. The indicated speed at max corresponds with the maximum speed given in the lathe specification. I have also checked the indication using a hand held precision tachometer and the agreement is very close. Battery life is more than 2 years.

Compared to commercial tachometers designed specifically for machine tools, such as those built into the later versions of the minilathe, the cycle computer suffers in two areas.  Firstly the display is quite small (although clearly readable) and secondly the speed of response is quite slow, taking a few seconds to settle down to a steady reading. Neither of these is a great limitation since I set the speed of the spindle and then never look at the tachometer whilst actually machining.