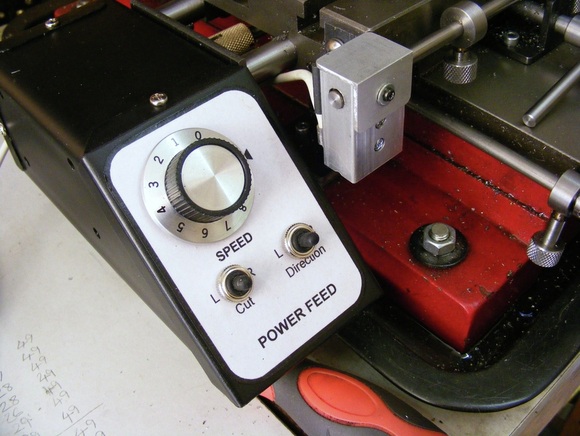 Achieving a nice steady feed is quite difficult on a milling machine, especially for very slow feed rates. It can also be quite laborious winding the table in and out for a long cut. This motorised feed unit was designed to overcome these problems. I wanted the design to incorporate the following objectives:

1. To take cuts at a feed rate set by a speed control, but (with repeated cuts in mind) to be able to reverse the table back to the starting point as fast as the motor driving it would allow, at the flick of a switch and without altering the speed control. The feed rate would then still be set ready for  the next cutting pass.
2. To be able to switch easily from having the table moving to the left during cutting passes and returning quickly to the right on the one hand, and vice versa on the other.
3. An electrical autostop arrangement to bring the table to a halt at some predetermined point by stopping the motor, this autostop to utilise much of the hardware from my existing manual feed modification.
4. The power feed to be easily disconnected/reconnected so that manual feed could still be used when required, with the electrical autostop's function changing to that of a simple mechanical stop.

The header photo shows the completed power feed: a black control box , and the end of the stop bar passing into an alumnium enclosure, which houses the two autostop microswitches.

The black control box houses the 12 volt motor with integral 60 rpm gearbox, a PWM speed control board and associated speed potentiomenter, a relay, two switches and a piezo buzzer. The Direction switch sends the table to the left when the lever  is over to the left and right when the lever is over to the right. The setting of the Cut switch determines whether the slow cutting passes will be leftward and the fast return rightward, or the other way about. Each switch has a centre off position, and either can be used to stop the motor manually.

In order to connect the feedscrew to the motor the feedscrew must be extended. The photo above shows the modified feedscrew. The left hand end is the extension. The spindle was chucked in the lathe and the end drilled out to 5 mm and then tapped M6. The extension is a  piece of 6 mm round stock threaded at one end that then screws into the feedscrew. 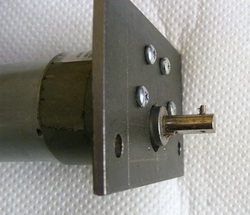 This shows the motor mounted on the motor plate. The motor is 37 mm diameter and 60 mm long with a shaft speed of 60 rpm at 12 volts. It is similar to the motors used to drive the lathe leadscrew and the lathe cross slide feedscrew. These motors are readily available on ebay.
The motor plate is made from 3 mm steel plate.
Note that the motor shaft has been cross drilled 1.5 mm and a 1.5 mm pin inserted. This pin will engage with the dog clutch. 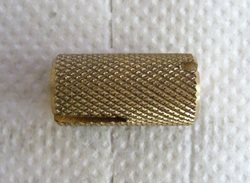 The dog clutch is made from a piece of 1/2" brass rod. This is drilled out to 6 mm and knurled. Both ends are slit using a 1.5 mm slitting saw. The slits at each end are at 90 degrees to each other as shown. The left hand longer slit fits over the drive motor shaft and the right hand shorter slit engages with the feedscrew extension. The long slit permits the dog clutch to slide on the motor shaft. By sliding the clutch towards the motor the feedscrew is disengaged. 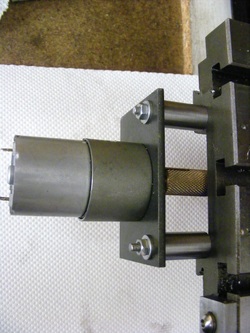 The motor plate is mounted on the end of the mill table using M4 screws (the studs shown were used until screws became available). It is spaced from the mill table by two 25 mm spacers. These spacers allow easy access to the dog clutch. The M4 threaded holes in the mill table were drilled freehand using a portable electric drill. The mounting holes in the motor plate are drilled 6 mm and this allows sufficient "wriggle room" to get the motor shaft aligned with the feedscrew.
Sliding the dog clutch to the right and turning the leadscrew until it clicks into position engages the motor. Sliding to the left disengages the motor 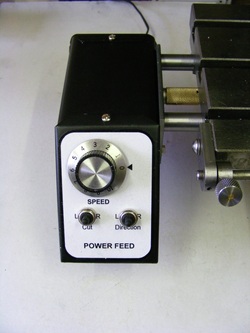 The housing for the motor and electrics was made from a  piece of 65 mm square guttering down pipe. The front was cut at a 45 degree slope so that the front panel was sufficiently large to accomodate all the controls. The front and rear plates were bent up from sheet steel salvaged from the side panels of an old washing machine. 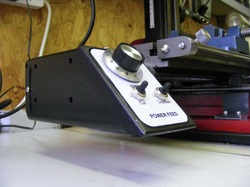 This side view shows the sloping front panel. Note the holes in the side of the enclosure. The upper ones allow access to the M4 socket screws that bolt the motor plate to the end of the mill table. The lower holes allow access to two further screws that secure the enclosure to the motor plate. They also allow some ventilation inside the box. The front label was injet printed onto self adhesive photo paper - further details can be found here. 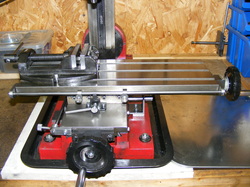 This photo shows the mill prior to adding the power drive. The mill had already been modified by adding the bar across the front of the table with two sliding stops. Full details of this modification can be found here.
In order to add autostop to the power feed this same basic hardware is utilised and only the two end brackets that support the bar are changed. When used in conjunction with the power feed, the bar must be free to slide a few mm either way, so that the fork fitted to the left hand end of the bar (see below) can operate either of the two microswitches. 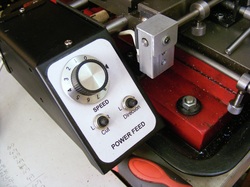 Note the small aluminium box at the end of the bar. This contains the microswitches of the autostop circuit. This replaces the original bracket for the stop bar. The box contains two microswitches - one setting the left hand limit and the other the right hand limit.
The box is made from 15 x 25 mm aluminium tube and is held by a steel bracket to the mill table. 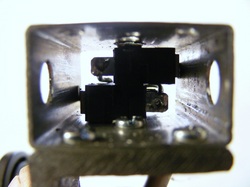 The microswitches are mounted inside the tube as shown here, using two M2.5 screws. The lever of the bottom microswitch is on the left and the connections to the right. The upper microswitch is in the reverse configuration with the lever to the right. The two large holes on either side of the tube are for the stop bar to pass through. The arms of the actuating fork (see below) go either side of the microswitches. At the bottom is the mounting bracket. This is secured to the aluminium tube using the three M2.5 screws visible inside the tube. 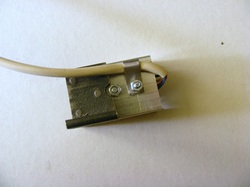 The four core cable from the microswitches is clamped to the back of the tube using a steel clamp under one of the microswitch securing screws. The steel mounting bracket and the ends of the three screws that secure it to the tube are clearly visible.
The microswitches are only switching a small relay so light duty cable can be used. I used some four core burglar alarm cable. 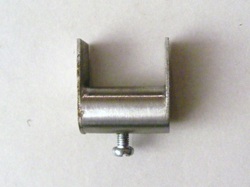 The microswitches are actuated by a fork. The fork consists of a piece of 12 mm round that has been drilled out to 6 mm. Two metal plates, also with 6mm holes, have been soft soldered to the ends. The  fork is clamped to the operating rod using a 3 mm screw (replaced by a grub screw in the final assembly). 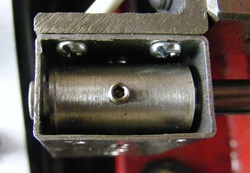 The fork has been dropped into the box over the microswitches and the operating rod passed through the fork and secured with the M3 grub screw. 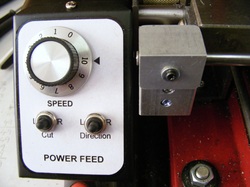 The box shown mounted in position. A cover for the top was made from a piece of 16 x 16mm aluminium angle. This is secured in place with a very small self tapping screw 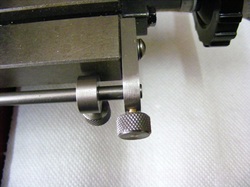 The right hand end of the operating rod was originally fixed to the right end bracket using an M3 grub screw. To use the autostop the bar must slide freely in order to operate the microswitches. The M3 screw hole has been drilled out and tapped M4 and a knurled screw inserted. By turning the screw the rod can be clamped when using the manual stops or unclamped when the autostop is being used.

This control circuit was developed by Andrew Franks and I have made few changes to it. One addition is a piezo buzzer to indicate when the microswitches are activated. 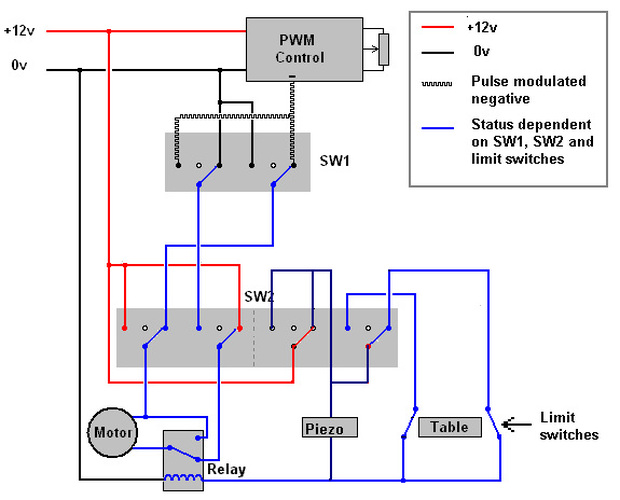 Switch 2 sets the table direction. In the cut direction it will supply modulated power to the motor enabling the motor speed to be varied to suit the cut requirements. When the switch is moved to the other direction then the full power is supplied to the motor of the opposite polarity so that the mill table rapidly moves back to the start. This switch is a sub-miniature, 4 pole double throw, centre off switch available on ebay (http://cgi.ebay.co.uk/Toggle-Switch-4-Pole-Double-Throw-Centre-Off-/160394464463?pt=UK_Trains_Railway_Models&hash=item2558414ccf ).

The relay is normally activated but drops out if the microswitch is activated. This disconnects the motor supply and shorts the motor to provide braking. The relay is a 10 amp miniature relay (Maplin part number JM67X). The coil voltage is 12 volts and the resistance is 320 ohms. 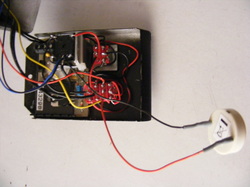 All the components, with the exception of the piezo buzzer, are mounted on the control box front panel. The relay is attached to an L shaped bracket held under one of the switch mounting nuts. The relay is secured with a sticky pad and a cable tie.
The unit is powered by a 12V 1A plug in power supply.
The motor speed is 60 rpm and the feedscrew pitch is 2 mm so the maximum speed of the table is 120 mm/minute.
The repeatability of the autostop is very good (circa 0.01 mm) but setting the stops is a little tricky. I intend to make a screw adjuster on the right hand side of the operating rod to facilitate the setting up process.