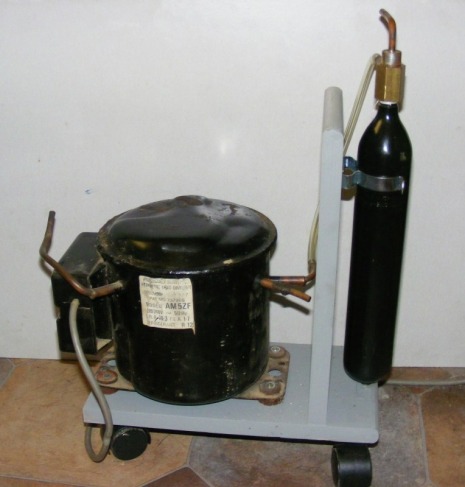 I have a 1.5 HP portable compressor that is not actually in the workshop but just outside it. Compressed air from this is piped into the workshop area and terminates at a "Quick connect" coupling under the bench. The main use for the air supply was for a blow gun that I use for clearing swarf from tapped holes etc. The problem with this system is that the compressor is quite noisy even though it is not in the same room. The compressor, like most, has a pressure switch that starts the motor when the pressure in the reservoir drops below a certain level. This leads to the compressor starting and stopping even when it is not actually being used. The sudden, unexpected start up is rather startling and on more than one occasion I have almost dropped whatever I was holding. I could have switched the compressor off after each use which would have solved the problem but then there is a long wait for the reservoir to fill before it could be used the next time.

Tucked away in a corner of the workshop was a small refrigerator compressor that had been lying around for some years. This had been removed from an old freezer. It is small and very quiet running. It occurred to me that if this were connected to a blow gun, without any reservoir then the supply of air would be almost instantaneous when the compressor was switched on, without all the noise and unexpected start ups of the bigger compressor. Of course the volume of air delivered is much lower than from the larger compressor but a few tests showed that it was adequate with a 1 mm nozzle to be an effective  blow gun.

The header photo shows the compressor mounted on a small trolley with castors. This makes it easy to tuck in a corner under the bench. On the same trolley is mounted a small cylinder. This is not so much a reservoir but more a water trap. The cylinder was from an old Sodastream fizzy drink maker. The valve was drilled out to accept two tubes: an inlet tube that entered at the top of the cylinder and an exit tube that passed into the cylinder for about half its length. A hole was also drilled in the bottom and this was tapped M5 for a screw and fibre washer. This is to allow any condensate to be released when necessary. The motor is wired directly to a switch. 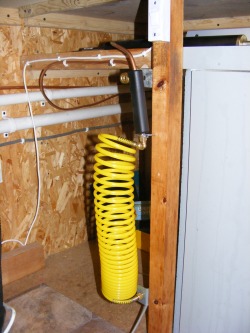 This photo shows a small under bench area of the workshop. The compressor goes into this space and it connects to the yellow coiled hose. The small white box on the wooden pillar is the switch that operates the compressor. Also shown at the top of the photo is the blow gun. It actually leans against the "quick connector" that connects to the larger 1.5 HP compressor. 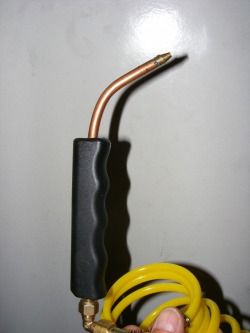 This is a close up of the blow gun. It is a length of 8 mm copper pipe bent to shape with a nozzle in the end. The nozzle has a 1 mm hole. The handle was someting I found in one of my junk boxes and I think it was from a scrapped kitchen utensil.
This compressor/blow gun is very convenient to use. It is small, quiet and provides a full flow of air within a few seconds of the compressor being turned on and flow also ceases just as rapidly on switch off. The air flow is sufficient for cleaning out holes but not so much that the debris flies everywhere. Since installing this system the bigger 1.5 HP compressor has hardly been used.