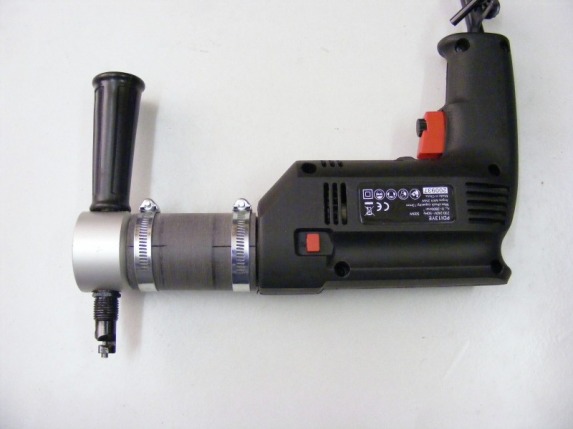 Most of my sheet metal I salvage from discarded domestic machines such as dishwashers and washing machines. Most panels on such machines have turned up edges. I have tried many ways of cutting sheet metal. Aviation snips work well on small straight and curved cuts in thin metal but for long cuts they are very hard work.  Furthermore the cut off strip is always curved and distorted and the edges are very sharp. Cutting into a discarded domestic machine panel is very difficult because the turned up edges will not bend. An alternative is to use a jigsaw. These are difficult to use unless the metal is really well clamped down and the cut is very slow. I have also used an angle grinder to cut sheet metal. These make much dust and sparks and are difficult to control to accurately follow a line.. I have also mounted an abrasive disc in a circular saw. This is good for cutting straight lines and it will work on thick sheet but  like the angle grinder the dust and sparks make this definitely a job for outside rather than in the workshop. Another problem with abrasive wheel cutters is that the discs wear away rapidly especially on thick sheet.

One day browsing on the RDG site (www.rdgtools.co.uk) I came across a nibbler for cutting sheet metal. This could cut 1.8 mm mild sheet steel, 1.2 mm stainless, 2 mm for softer materials like aluminium, coper and plastic. High rates of cut were possible. This tool was sold as an attachment to fit on a standard electric drill. It was very cheap at under £20 and I decided to buy one.

I made a few cuts with my new toy. What a revelation! I could cut sheet metal at high speed ( metres/minute) with little noise to leave clean straight, undistorted edges on both sides of the cut. To cut a flat sheet from a domestic machine panel I just drilled a hole in the corner, inserted the tool, and using the turned up edge of the panel as a guide, cut the turned up edges off. It was unbelievably easy.

The only downside was that the nibbler produced thousands of tiny crescent shaped nibbles as it cut. These nibbles get everywhere and become embedded in rubber soled shoes. 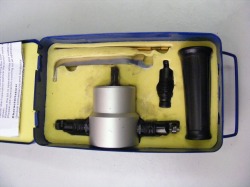 This shows the nibbler kit as supplied by RDG. It is housed in a nice metal box. At the bottom is the nibbler head. This is double sided so that when one of the cutters becomes worn then the other end of the nibble can be used. The handle shown on the right screws over the cutter head not being used. Included in the kit was a spare cutter head and a spare cutter rod (at the top) and a spanner for dismantling the unit. 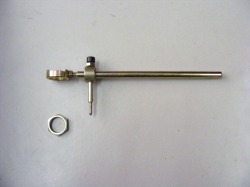 Also included in the kit was an attachment for cutting circles as shown here. This just attaches to the base of the cutting head. It can cut circles from 20 up to around 250 mm diameter.
The nibbler head has a shaft that is designed to be gripped in the chuck of an electric drill. This shaft has a 7 mm hexagonal profile. This leads to the situation where the head of the nibbler can rotate with respect to the electric drill and it is up to the user to hold both the drill and the nibbler head using both hands. This in turn makes it quite difficult to follow a straight edge, clamped to the sheet being cut, accurately. If the nibbler head could be fixed to the drill it would be much easier to control. In principle this should be easy since the nibbler had a 43 mm collar on the shaft side that was the same diameter as the standard collar on an electric drill. However, with the chuck on the drill, the nibbler was quite a long way away from the body of the drill. 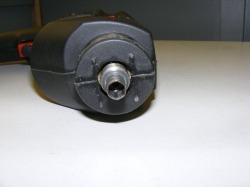 I bought a cheap electric drill (£10 in Argos) and removed the chuck. This had a 3/8" UNF thread on the shaft. I made a special adaptor with a 7 mm hexagonal socket at one end and threaded 3/8" UNF that would screw into the female threaded hole on the drill spindle, as shown in this photo. To make the adaptor I started with a piece of 12 mm bar that was drilled out 4 mm. The end of the bar was then opened out to 7 mm with a drill. The outside diameter was reduced to leave a wall thickness of 1 mm. The metal was heated to red heat to relieve any stresses in the metal and allowed to cool. A forming tool was made from a piece of 7 mm hex bar. This was turned down for about 20 mm to 4 mm so that this end would slide easily in the 4 mm hole in the through hole of the adaptor. A transition zone was formed on the form tool at a 45 degree angle between the 4 mm round section and the 7 mm hexagon section. The form tool was then pressed into the thin tubular end of the adaptor piece using the vice. This produced a piece with a well formed hexagonal socket at one end and a 12 mm round section at the other. However the concentricity of the two section was not good. The piece was then gripped by the hexagonal end, with the form tool inside, in the three jaw chuck of the lathe and the 12 mm round end was reduced down to 3/8" and then single point threaded 3/8" UNF. By doing this the threaded end is closely concentric with the hexagonal socket. This was then screwed into the drill. 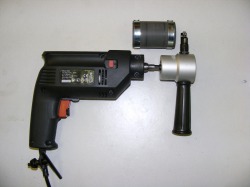 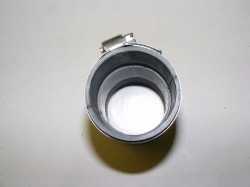 The end of the PVC tube is split in two places using a hacksaw to allow sufficient movement for the tube to grip the collar on the drill when the jubilee clip is tightened. The other end of the tube is treated in the same way.
The header photo shows the finished nibbler after assembly. By rigidly attaching the nibbler head to the drill it is much easier to control.

A bench mounted nibbler with a table has also been designed and built - see here.